The art of Mitch Barrett

The painting represents the artist's unique perception and creative interpretation of his surroundings, mediated by his psyche and experiences. We create our own reality, which is an illusion.

The artist, depicted as a small boy, takes inspiration from his surroundings; his studio is in Paris and he reaches for a jigsaw piece from a map of the city, his frame of reference. He turns to paint the shape of the jigsaw piece on the model, so that it becomes part of her. On the wall are sketches he has made of the model, posing with one arm raised and her hand in her hair. When he turns to work on the painting, her pose is interpreted by him as the shape of a horse's head. The cat has knocked an hourglass over on to its side; the artist portrays the fallen hourglass in his painting as the symbol for infinity, and the grail beneath it assumes the shape of the bowl on the table. All around him is chaos – a dog jumps in the air after a ball, another pushes the stool over that the artist is balanced upon whilst he is painting the model; papers are flying all around, but for the artist this chaos is fun.

As a small boy he is playing the game of creativity, drawing inspiration from one thing and then another, and mixing these elements together to create a scene with a different meaning and a deeper resonance. In manifesting an altered perception of his reality, he is akin to 'The Magician' of the mystical Tarot, the symbolic conjuror of illusions. 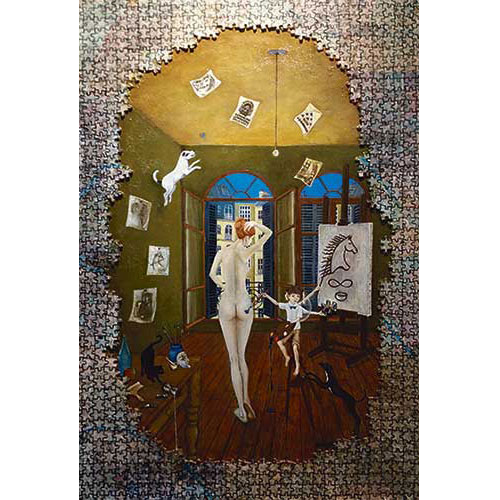