The art of Mitch Barrett

Mitch Barrett was born in 1960 in Cannock, Staffordshire, England. As a teenager he was fascinated by a large print of 'Metamorphosis of Narcissus' by Salvador Dali on permanent display in the hallway of the art department of his High School. Surrealism with its dream like images, echoes of deep emotions paralleled the Greek myths that had already captivated him.

Barrett at the age of 16 years had already sold his first paintings in the style of Surrealism. Later he would explore the subject of narcissism from his own perspective of art and his own experience for a number of years as an international fashion model. He trained at Stafford College of Art and Design, then studied screenwriting and directing at Bournemouth and Poole College of Art and Design and attended the University of Television and Film in Munich, Germany.

In Vienna 2001 he met Professor Ernst Fuchs - one of the founders of Fantastic Realism. Barrett studied and later assisted Fuchs in Austria and France, where he adopted revived Renaissance Masters' techniques including the use of egg tempera with oil glazes, which Fuchs called the 'Mischtechnik'. Fuchs was a pivotal figure in shaping Barrett's techniques and his philosophy as an artist; his adage was

"By all means break the rules, but first know the rules." Professor Ernst Fuchs

Barrett combines traditional and contemporary mediums. Although he was influenced by various styles of art including Surrealism, Expressionism, Symbolism, Visionary and Fantastic Realism, he believed in finding his own way and to not be confined to any particular style of art. The foundation for this belief came from his experience of martial arts and the philosophy of the legendary Bruce Lee in developing Jeet Kune Do.“Use only that which works, and take it from any place you can find it.” - Bruce Lee, Tao of Jeet Kune Do.

Imagination is the essence of Barrett's work and overlaps with the mythical world and eastern philosophy.

"I aim to tell stories through my paintings, sculpture and through my writing which I hope will resonate with the observer on a deeper level" - Mitch Barrett

Taking some inspiration from mythology - ' the power of myths' by Joseph Campbell - and Jungian psychology, he also draws on personal experience and times living in Japan and Europe. Barrett often confronted by his own narcissistic demons and inner conflicts rooted in duality, strives for self exploration through his artwork. The concept of 'fragmentation of the self' inspires his drive to seek unity - embracing masculine and feminine, and both the light and the shadow- expressed in his paintings, sculpture and with writing 'Dangerous Dreams'.

'Dangerous Dreams' is about an artist confronting his alter ego; and the story is complemented with his paintings throughout the story. 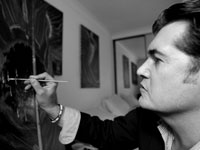 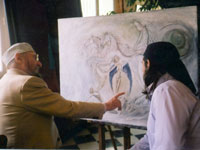 Learning from Prof. Fuchs in his studio at Castel Caramel, Castillon, S.France, Summer, 2002

“Barrett emphasizes the contrast of light and dark, his figures are part of an elaborate, eclectic setting which contains a mixture of precise linear passages and painterly suggestive ones. The lengthy and painstaking creative process of his work, illustrates Barrett’s belief that the artist should always aspire to balance inspiration and intellect, imagination and revelation. In his exploration of the mythological idea of man’s union with the divine, his figures are enhanced with symbols of sexual potency and eternal power from Occidental, Oriental and occult traditions. In brief, through his neo-Platonic visual exploration, Barrett is seeking comprehensive answers to the essential dilemmas of life.”

" I like your creativity. I like the elongated figures. Reminds me a bit of Goya and the colours remind me of Chagall and Kandinsky........"

Palm Art Award 2016 – Certificate of Excellence for outstanding quality and originality of the art – Germany.

Palm Art Award 2011 – Certificate of Excellence for outstanding quality and originality of the art – Germany.

Mitch Barrett’s paintings and sculptures are held in many private collections, have been exhibited and sold around the world.